In mid-2006 a team from Charles University in Prague launched preparatory work on the Albertov Minicampus project. The project involves three of the University’s faculties – the Faculty of Science, the Faculty of Mathematics and Physics, and the First Faculty of Medicine. Negotiations between representatives of these faculties, coordinated by the Rectorate, culminated in April 2008 with the release of a draft impact study proposing the addition of two new buildings to the University’s Albertov complex – a Biocentre and a Centre for the Study of Global Change. The project will link together different research centres, serving as a basis for Master’s and PhD studies. At the core of this complex there will be large shared laboratories and a number of smaller laboratories equipped with state-of-the-art technologies.


The impact study also addresses the affected sites, including existing buildings; it contains a heritage protection and zoning plan assessment, plans for traffic management and utility networks, and proposals for the volumes of both buildings based on the space requirements of the respective faculties. The planned development and the impact study for the Minicampus received a favourable assessment from the Department of Culture, Heritage and Tourism at Prague’s City Authority.


animation of the Albertov campus


The Biocentre will be designed as:


Research at the Biocentre will be focused on the study of living systems from the perspectives of human health, new biotechnologies and biodiversity protection.


The Centre for the Study of Global Change will be based on existing teams at the Faculty of Science and the Faculty of Mathematics and Physics working in a range of environmental, biological, climatological, geochemical, geobiological, geophysical and geographical fields. The main focus of the Centre will be on the study of global change in relevant palaeological, palaeographical, evolutionary and historical contexts.


The impact study addresses the possibilities of the site with a view to the feasibility of the plan to develop the two University research centres (including sufficient reserve capacity). Due to the complexity of the foundation systems (caused by groundwater levels at the site), various options are currently being examined with respect to the number of underground floor levels in both buildings and the links between the Albertov complex and adjacent transport infrastructure routes. 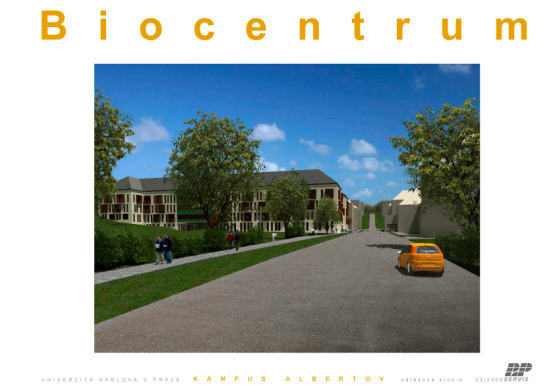