Beyond 1989 – Hopes and Disillusions after Revolutions


France’s Minister for Europe and Foreign Affairs Jean-Yves Le Drian and Czech Foreign Minister Tomáš Petříček were the main speakers on Friday, December 6, in a debate held at the Blue Auditorium at Charles University’s Faculty of Arts – part of a two-day conference entitled Beyond 1989 – Hopes and Disillusions after Revolutions. 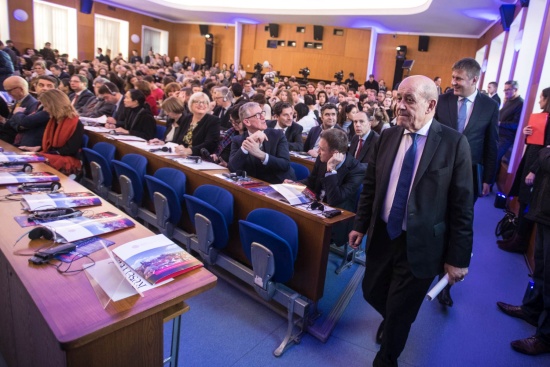 
The meeting and discussion marked the anniversary of the first official visit to Czechoslovakia by a French head of state.On December 7, 1988, President Francois Mitterand arrived in Czechoslovakia with a strong human rights agenda and met with Czech dissidents in a show of support – roughly a year before the start of the Velvet Revolution and the collapse of communism in Europe. A similar meeting would take place in September 1990; but by then Václav Havel was the country’s first-communist president and fellow former dissident Jiří Dienstbier was Czechoslovakia’s foreign minister.


Friday’s meeting was not just a look back at 30 years but a discussion about the future direction of Europe. Czech Foreign Minister Petříček expressed a preference for incremental or smaller steps on which the EU can agree, to avoid unexpected surprises or shocks further down the road. Additionally, the Czech foreign minister made clear more needed to be done to bring regular citizens into the fold. France's Minister for Europe and Foreign Affairs Jean-Yves Le Drian one of main guests at CU.


In his presentation, the Minister for Europe and Foreign Affairs Le Drian placed great emphasis on the importance of defence as a key facet of European cooperation and essential when it came to maintaining European autonomy. He cited the need for Europe to be able to guarantee its own defence (membership in NATO notwithstanding or as a “starting point”). Mr Le Drian also said that Europe needed to avoid dependence when it came to areas such as digitalisation. 
Others who spoke at the two-day conference included the head of CEFRES, Jérôme Heurtaux, the Czech Academy of Science’s Institute of Contemporary History’s Miroslav Vaněk, and Charles University Rector Tomáš Zima and theVice-Rector for European Affairs Lenka Rovná.


The conference was organised by Charles University together with the Czech Academy of Sciences and the French Research Center in Humanities and Social Sciences – Prague (CEFRES).

Translated and edited by Jan Velinger