Professor Aharon Oren, Ph.D. (*1952), professor of the The Hebrew University of Jerusalem in Israel, and Ivan Damjanov, M.D., Ph.D. (*1941) of the University of Kansas, have today received the honorary title Doctor honoris causa in the Big Hall of the historical building of Carolinum. Both researchers received the title for their extraordinary lifetime work and for significant contribution to the development of research at Charles University. 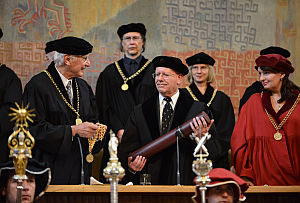 Prof. Aharon Oren, Ph.D., z Hebrejské univerzity v JeruzaléměProfessor Aharon Oren, Ph.D., is one of the most important Israeli researchers and university personae in microbiology. He’s also one of the world’s best experts in the microbiology of extremophiles, especially halophiles. In his research, he primarily focuses on the life strategies of many of these organisms, their adaptation to the environment, and its colonization. Professor Aharon Oren is an internationally acclaimed expert, teacher, and popularizer of science. An author of 5 books and editor of 11 other publications, published in the most prestigious houses in the world, he’s also member of numerous scientific board, and conference organizer.


Professor Oren has cooperated with the staff and students of the astrobiology group, geological section at the Faculty of Science, Charles University in Prague, since 2009. Every year he comes to visit the Czech Republic to take part in research activities, and also in training students of master’s and postgraduate programs. He also organizes summer microbiology courses and workshops focused on hypersaline ecosystems, involving students and staff members of the geological section. Together with Professor Jan Jehlička, Professor Oren co-organized exobiology-focused sections at the international geochemical conference Goldschmidt (2013, 2015).  So far, the outcomes of the cooperation include over 12 joint publications in international journals, including renowned titles such as Philosophical Transactions of the Royal Society A or Applied Environmental Microbiology. For a long time, Professor Oren has been struggling for a stronger cooperation and exchange of students and experts between Czech and Israeli academic sites. 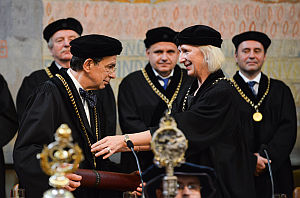 Ivan Damjanov, M.D., Ph.D., z Kansaské univerzityIvan Damjanov, M.D., Ph.D., is one of the world’s best pathologists. He significantly contributed to understanding the origin and behavior of germinal tumors, and thus to the development and improvement of patient care in this area. During his career, he has published many important original scientific papers and monographs. His books affected several generations of young pathologists, not only in the U.S.


Ivan Damjanov has cooperated with Charles University pathologists since 1987. During the past years, he has participated in many important expert meetings in Prague; between 1987 and 2014, he also significantly contributed to the development of research cooperation between the Czech pathologic sites and the University of Kansas, where he was in charge of the pathological institute for years.