In defiance of time 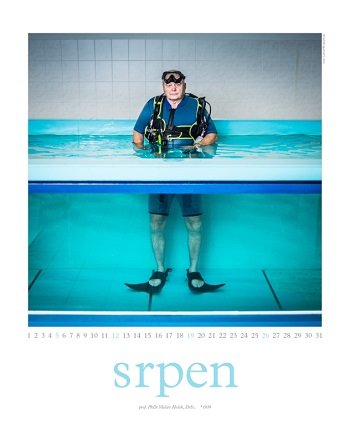 The editorial team of the Forum magazine is publishing its summary of the past year for the second time. Last year’s summary paid tribute to the largely unsung and unseen staff at the Rectorate without whom the university could not function, This year Forum magazine decided to pay tribute to a dozen significant personalities on the Czech scientific scene. Once again a non-traditional method was chosen to profile them.

ʺWe did not photograph the scientists at work, but instead we asked them to give us a glimpse of their private lives and asked them what they enjoy and are interested in during their free time outside of work,ʺ explained Forum editor Petra Köpplová.

Sports administration at an international level demands above all a good knowledge of sports ethics and law as well as a good command of languages. For this reason, six top European universities, including Charles University, have teamed up to train leading sports managers.

2018 marked the 49th anniversary of Jan Palach’s self immolation in protest against the Soviet-led occupation of 1968. Charles University paid it's now traditional homage to Palach’s self sacrifice with a series of events, lectures, and screenings which took place during the so-called Palach Week. 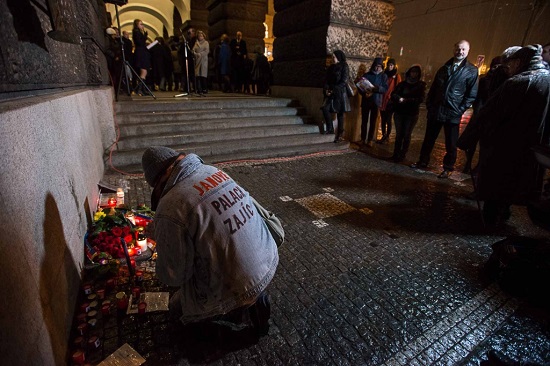 Almost 20 years after its foundation, Charles University’s Faculty of Social Sciences has been given its own insignia. Up till now, students at the faculty have had to take their entrance and graduation oaths using insignia ‘borrowed’ from the university’s Philosophical Faculty.

The new insignia were unveiled at a celebratory evening at the Karolinum attended by social science students as well as students from the journalism department of Václav Moravec. Moravec was one of the main initiators of a collection aimed at paving the way for the faculty to asset its separate identity under the slogan ʺLet’s swear with our own insignia.ʺ The collection was launched in the Spring of 2017 using the Hithit portal and thanks to its success the 20 year old dream of the former dean, Professor Miloslav Petrusek, has been fulfilled.

Tomáš Zima was inaugurated for the second time as Rector of Charles University at an official ceremony in the large chamber of the Karolinum. Personalities from the Czech political and social sphere were present as well as newly appointed Vice-Rectors, Deans, and Vice-Deans. 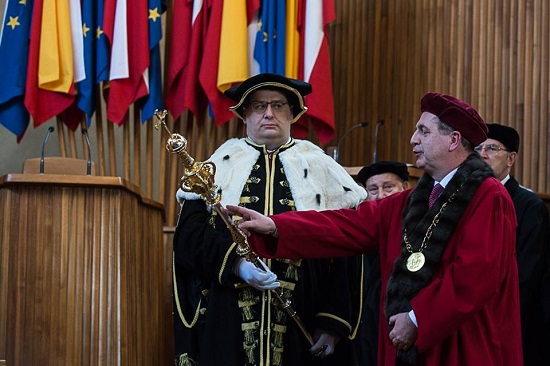 Lift off for paternoster

One of the symbols of the Faculty of Law at its impressive site in the centre of Prague - a paternoster lift - resumed normal service from March 14. Use of the almost 80-year-old paternoster was interrupted in 2005 due its poor technical state. Repairs eventually dragged out over 13 years with the work completed thanks to a public collection.

A map depicting the 16th century Ottoman siege of the island of Malta, which forms part of the collection of the Faculty of Natural Sciences, has been included in UNESCO’s Memory of the World list of documentary treasures. The unique map found its way as the 16th item on the worldwide heritage list of cartographical treasures.

A computer game recreation of the 1942 assassination of the Nazi acting Protector of Bohemia and Moravia, Reinhard Heydrich, by Charles University’s Philosophical Faculty and Faculty of Mathematics and Physics has met with exceptional success. After the game’s merits were already recognised at the world championships for independent computer games, the team behind the game took first prize at Berlin’s A MAZE festival. In spite of the local success, the game cannot be offered in Germany because of the national ban on Nazi era symbols.

In June, an international panel of experts recognised the careful restoration and conservation work carried out on the St. Wenceslas Rotunda, an 11th century chapel which disappeared for centuries. It was eventually rediscovered under Charles University’s Faculty of Mathematics and Physics during reconstruction work in 2004 after

experts for more than three centuries had believed it had totally disappeared. Conservation work since its rediscovery was recognised with a third place in the Europa Nostra 2018 awards for the most popular heritage sites.

The women’s rowing eights team from Charles University took first prize in the 105th Prague Mayor’s annual competition. The Eights competition is traditionally the most successful for the university team. This time round, the men’s team took second place in their competition.

Charles University made its contribution to the 100th anniversary of the founding of Czechoslovakia with a unique exhibition called 100 Years – 100 Items – 100 Stories. Each of the chosen exhibits represented one specific year from the 100 years of Czech and Slovak history since 1918. Visitors themselves were asked to choose an exhibit to represent the year 2018.

Charles University obtained two precious written records from a private collection dating back to 1347 which mark the agreement for university education to be launched in Prague. These key documents were until now missing from the university collection and will now form a key part of its written heritage.

The university became the first in the Czech Republic to create a daughter company tasked with the practical use of new innovations and technical know-how. With this move, Charles University finds itself in the select company of the likes of Oxford University, the Catholic University of Leuven (Belgium) and the Federal Technical University in Zurich. Rector Tomáš Zima expressed the hope that the step would prove an inspiration to other Czech universities.


Children’s day in the Carolinum

As part of the celebrations of the centenary of the founding of Czechoslovakia, a Children’s Day was organised in the Carolinum. Adults and children could take the opportunity of getting to know what everyday life in the First Republic was like and even meet up with some of the best known personalities and public figures from the era

between 1918 and 1938.They could also undertake some physical exercises with the Sokol organisation, converse with Legionnaires about their Siberian exploits or enjoy extracts from popular plays from the era.

The grounds of Prague’s Vyšehrad fortress played host on September 15th to recreations of life under the First Czechoslovak Republic. Charles University’s First Faculty of Medicine participated in the event. On show were veteran vehicles from the era, field hospitals, and dance and musical groups. Gastronomic specialities were also recreated and children were shown how to craft wooden whistles and given handwriting lessons.

Faculty of Natural Sciences doctoral graduate Vojtěch Kubelka was featured on the cover page of the international journal Science in recognition of his research focusing on the affect of climate change on the life cycle of wading birds. His research mainly concentrates on bird nest.

2018 marked the very first time that Charles University has withdrawn an academic title after plagiarism had been discovered. The original dissertation in question was submitted by a graduate from the Hussite Theological Faculty and was uncovered thanks to use of the new Turnitin platform for uncovering plagiarism.

A bust of Rector Oldřich Starý was unveiled at the Ovocný trh entrance to the Carolinum to mark the 50th anniversary of the reconstruction of Charles University. Starý made a fundamental contribution to the 30 year long transformation of the university’s main administrative centre serving the world’s third oldest continuously functioning