Charles, by the Grace of God, King of the Romans, for Ever and Ever the Multiplier of the Empire and King of Bohemia. For the perpetual remembrance of the matter.


Among the desires of our heart and that which continuously occupies our royal mind with its weightiness, the heed, concern and attention of our mind is constantly turning to our desire that the Bohemian kingdom – which we love above all our other honourable acquisitions and possessions, be they hereditary or acquired by good fortune, with the special affection of our mind, and for whose ennoblement we strive with all our great ardour and for whose honour and good we strive with all our efforts – should, as by act of God, rejoice in the natural plenitude of the fruits of the earth, and should be adorned, by the order of our providence and our endeavour in our time, with a multitude of learned men.


And thus that our loyal people of the kingdom, who crave with unceasing hunger for the fruit of learning, should not need to beg for alms in foreign lands, but should find in our kingdom a table laid for feasting, and that those who are distinguished by their acuity, both innate and given from above, should become educated through the acquisition of knowledge, and should no longer be forced to wander around the world, turn to foreign nations, or to beg in alien parts in order to quench their craving, now considering such wandering useless, but that they should instead consider it their honour to be able to invite others from foreign lands and let them partake of that delectable fragrance and great gratitude.


Therefore, in order for such beneficial and praiseworthy intentions of our mind to bear dignified fruit and for the dignity of our kingdom to be multiplied by pleasing new deeds, on having prudently contemplated the matter we have decided to establish, elevate and newly create a Studium generale in our metropolitan and especially charming town of Prague, abounding in both a wealth of fruits of the earth and amenity of the place, so convenient and suited for such a great task.


At this Studium generale there will be doctors, masters and pupils of all faculties, to whom we promise excellent goods, and to those whom we consider deserving thereof, we shall grant royal gifts.


The doctors, masters and pupils at any faculty and beyond, all together and each one separately, no matter whence they hail, whether during the travels, during their stay or on their return, we wish to keep under special protection and under the aegis of our majesty, giving to them all a solid guarantee that all privileges, prerogatives and freedoms - such as they enjoy by decree of royal power and such as are enjoyed by the doctors and pupils of both the Paris and Bologna Studia - shall be graciously granted to each and all who may wish to come here, and that we shall ensure that these freedoms be inviolably honoured by each and all.


As evidence thereof, and for safe assurance, we have had this charter drafted and ordered that it be confirmed by the seal of our Majesty. Done in Prague, in the first indiction, on the Seventh Day of the Month of April of the Year of Our Lord Thirteen Hundred and Forty Eight, in the second year of our rule. 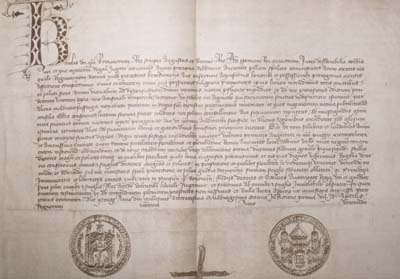