The Czech Republic is a state in the very heart of Europe. It consists of the historic lands of Bohemia and Moravia, together with part of Silesia. Occupying an area of 78 866 square kilometres, it is bounded by Poland to the north, Austria to the south, Germany to the west and Slovakia to the east. It has a population of about 10.33 million, the great majority being of Czech nationality. Ethnic minorities, including Slovaks, Poles, Romanies, Germans and Hungarians, make up around 5% of the population. Czech is one of the West Slavonic languages, an Indo-European language group. The capital of the Czech Republic is Prague.

The currency is the Czech crown (Koruna, abbreviated Kč). The crown is divided into 100 hallers (haléř, abbreviated h). 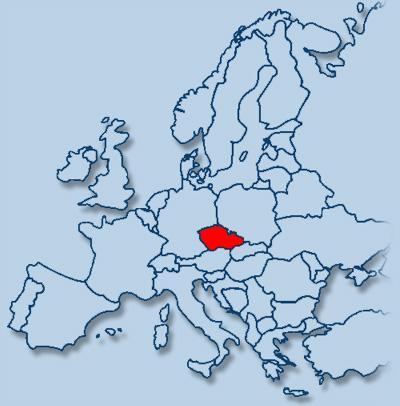 The republic has a varied landscape. Bohemia is partially ringed by mountain ranges, i.e. the Šumava, the Bohemian Forest, the Jizerské Mountains, the Giant Mountains (including Sněžka, the highest point in the Czech Republic at 1602 metres above sea level), and the Eagle Mountains. The Moravian Plain is protected on the west by the Bohemian-Moravian Uplands, and on the north by the forested ranges of Jeseníky and Beskydy. Fertile lowlands are to be found in the valleys of the major rivers, the Vltava, the Elbe, the Oder and the Morava. The climate is generally continental in character. Temperatures can be extreme for short periods (+30 Degrees Celsius in Summer or 20 Degrees Celsius in winter) but the normal temperature are 23/29 Degrees Celsius in summer and 11/0 Degrees Celsius in winter.


The Czech Republic has traditionally been an industrial country. Engineering is the largest industrial sector, but chemicals, food, textiles and metallurgy are all significant. Agriculture is highly developed, producing enough to feed the population and a surplus for export.


Historically, the territory has been inhabited by Slavs since the arrival of Slav tribes in the area in the 5th century AD. The first Slavonic structure with elements of political statehood was the short-lived Samo s Empire (Sámova říše), founded in 623. The first historically recorded Czech prince was Bořivoj I of the Premyslid Line, which gained control over Bohemia and part of Greater Moravia (Velkomoravská říše). The Czech princes, later acquiring the title of kings, played an important role in Central Europe. When the Premyslid Dynasty died out in the High Middle Ages, the Bohemian throne was inherited after some years of instability by the House of Luxemburg, related to the Premyslids by marriage. The Kingdom of Bohemia then became the centre of the Holy Roman Empire under King Charles IV (Karel IV), who became emperor, and his son Wenceslas IV (Václav IV). Charles IV encouraged the development of the Bohemian Lands as a centre of education, architecture and the arts, and Prague became one of the largest European cities of the time. The early 15th century saw the rise of a reform movement in the church led by John Huss (Jan Hus), a professor, dean and later rector of Charles University. In 1415 he was tried by the Church Council of Constance and burnt at the stake as a heretic, an event that sparked bitter religious wars in the country. The wars came to an end with the reign of the elected King George of Poděbrady (Jiří z Poděbrad). Then, after a period of rule by the Polish Jagiellonian dynasty, the Bohemian throne passed to the Habsburg family, which was to rule for centuries (1526 1918). The Habsburg rulers favoured the German inhabitants of the Bohemian Lands over the Czechs, and the Catholic church over the Hussites and protestants. Complex ethnic, religious and political tensions were held in balance for a few decades. The reign of Rudolph II (Rudolf II) at the turn of the 16th/17th century even brought what is sometimes called a Second Golden Age to Prague, since Rudolph s court attracted artists and scientists from all over Europe, including the astronomers Tycho de Brae and Johannes Kepler. Under Rudolph s successors, however, there was a Bohemian revolt against the Habsburgs. The defeat of the revolt at the Battle of the White Mountain in 1620 inaugurated 300 years in which the Bohemian Kingdom was ruled from Vienna. The forced recatholicisation of the population was followed by Germanisation, and expressions of desire for an independent Czech national life were suppressed. By the end of the 18th century, however, there were signs of the development of a movement known as the Czech National Revival . At first it concentrated on reviving Czech language and culture, but by the late 19th century it was developing strong political aspirations for Czech autonomy or even independence from Austria-Hungary.


With the collapse of Austria-Hungary at the end of World War I, the Czech and Slovak nations were able to take their fate into their own hands in the newly established Czechoslovak Republic. Under its first president, T. G. Masaryk, Czechoslovakia became a highly democratic country with a high standard of living. The hopes and achievements of the First Czechoslovak Republic were crushed, however, by the German Occupation (1939 1945). A few years of renewed liberty after 1945 ended in 1948 when the communists seized power, directed by the Soviet Union. After twenty years of communist rule, the political and cultural thaw known as the Prague Spring led tragically to invasion by Soviet forces, and then to another 20 years of tyranny, this time known as normalisation . New restrictions were imposed on freedom and there was a general stagnation of the economy, services and infrastructure. Freedom came only with the Velvet Revolution of 1989, as the Berlin Wall came down. Mass demonstrations, with the dissident Václav Havel at the forefront, finally forced the communist government to resign. Havel was elected first president of the post-communist Czechoslovakia and remained president for 14 years, although from 1993 he was only president of the Czech Republic, following the break-up of Czechoslovakia into two separate states. In recent years the performance of the Czech economy has been affected by the 1997 currency crisis and the restrictive macro-economic stabilisation package, but there have been impressive structural reforms. The Czech Republic has moved towards integration in world markets and, of course, political integration in western structures. Since 1999 it has been a member of NATO, and it is due to enter the EU next year. In 2003 Václav Klaus became new president of the republic.