Hradec Kralove is the oldest town in Bohemia, the historical and cultural centre of East Bohemia with about 100,000 inhabitants. Hradec Kralove is about 100 km from the capital of Czech Republic Prague, and it is easily accessible by bus, car or rail. 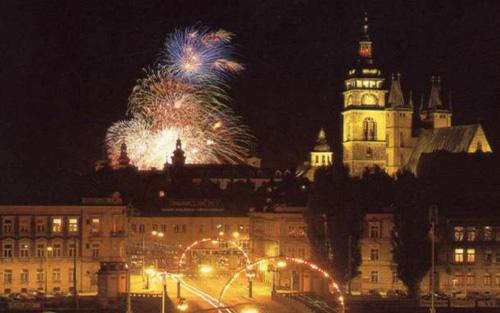 The first signs of settlement by farmers here date from the 3rd century B.C. In the 10th century A.D., the settlement called Hradec (Castle) became a busy one. In 1225 Hradec became a free royal town. In the 14th century it became a dowry town of Czech queens, and later the word Kralove (of Queens) was added to its name.


The centre of the old town a historical monument reservation is formed by the triangular square Žižkovo náměstí. Standing in its centre is a 19-m high plague column. The square is dominated by the twin-towered Gothic Cathedral of the Holy Ghost from 14th century, adapted in Neo-Gothic style in the 19th century. In its neighbourhood stands the sandstone White Tower from the 16th century with the second biggest bell in Bohemia (weight 10 tons). The old Renaissance Town Hall has two late Baroque towers. On the southern side of the square is the large bishop s residence from 18th century, built with the participation of G. B. Santini.


Nowadays, the town is a centre of the engineering industry (production of plants for sugar factories and distilleries and of oil engines), but also food industry, works producing Petrof pianos and other industrial branches. Hradec Kralove is a town of culture and education. It is the home of two faculties belonging to Charles University in Prague (the Faculty of Medicine, the Faculty of Pharmacy), and the University of Hradec Kralove (with the Faculty of Education, and the Faculty of Management and Informatics), and the Military Medical Academy.